When kids reach around 8 years old, their sense of adventure is suddenly ignited. Their hyperactive nature will not allow them to stay indoors, as they tend to enjoy action-related play. Do not be surprised if your young lad aspires to be the next Batman, Spiderman or any gun-wielding superhero.

Allow your son to explore his sense of adventure, by bestowing him the most powerful Nerf gun for kids. Moreover, even older kids and adults can get into the fun. Do not fret, for it is not a real gun and kids above 8 years can handle it pretty well. The following is a summary of some of the best Nerf guns you can buy for your kids. 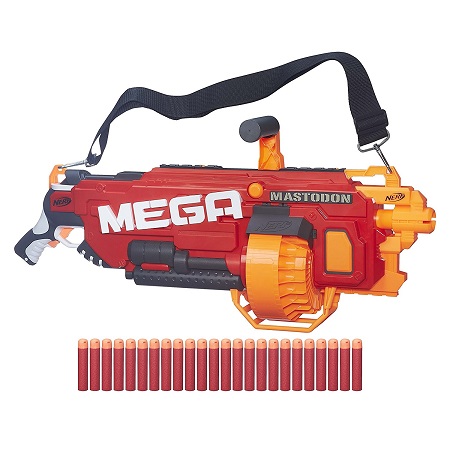 Sending your kid to the battlefield with the Nerf N-Strike Mega Mastodon Blaster is a sure way of securing victory. This toy gun is the first motorised mega blaster that will send all enemies scattering for safety. It has a 24-dart rotating drum that can dispatch two dozen mega darts all at once, up to a distance of 23 meters. The handle and shoulder strap make it easier for your kid to carry the massive mega blaster when going into the battlefield. The drum cage and two drum covers will ensure that the rotating drum remains safe, away from damage.

What we like about it – Kids will love the amazing, boisterous sound that comes out when firing the 24 darts from the motorized rotating drum. Its power and size is also intimidating to battlefield “enemies”. 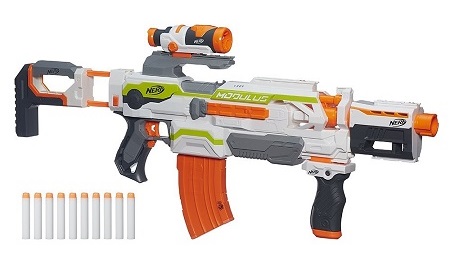 Nothing is more exciting to kids than building their own blaster. The Nerf N-Strike Modulus ECS-10 Blaster provides just that. Featuring over 30 different combinations, your kid will enjoy building custom blasters for any mission or battle. It can be broken down into a smaller weapon, or combined to form a sniper rifle. Its banana clip holds up to 10 darts and can shoot at a distance of up to 27 meters. If 10 darts are not enough for your kid, you can upgrade the toy weapon using the Modulus flip clip upgrade kit, for a more engaging and exciting battle.

What we like about it – This toy will stimulate the imagination and creativity of your kid, as he tries out the 30 different combinations.

If you are looking for the most powerful Nerf gun for your kid, then the Nerf N-Strike Mega Centurion Blaster fits the bill. The blaster comes with a bipod stand that your kids can use to support their weapon during battle. The gun consists of 6 whistle darts that scream through the air when launched. The darts are not only bigger, but can also shoot up to 23 meters making it one of the finest long-range assault weapons in the Nerf gun armory.

What we like about it – The Mega Centurion Blaster is the champ in every battle. Its great design, coupled with its huge size makes it the ultimate assault weapon for any Nerf battles.

With the Nerf N-Strike Modulus Elite Retaliator Blaster, vengeance is your kid’s ultimate mission in the field of battle. It has 4 different configurations that make it easy for your kid to change combinations swiftly during battle. Your kid will never find himself in a catch22 situation, as its quick to reload clip allows for faster replenishing of ammunition. Its easily removable stock helps users to steady their shot before firing. Its barrel extension has tactical rails that your kid can utilize with other Nerf accessories.

What we like about it – Stimulate your kid’s imagination with the 4 different configurations that come with the gun. Its simplicity makes it easy to use and its blaster performance is gratifying. 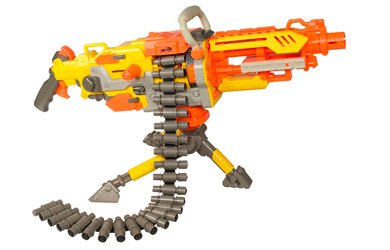 If you are looking for the largest automatic Nerf gun for your kid, then consider acquiring the Havok Fire EBF-25 Blaster. It is the largest and fastest automatic NERF blaster in the Nerf arsenal. It can shoot up to 3 darts per second, making it the ultimate weapon for any Nerf battle or mission. Your kid will never run out of ammunition during a battle, as it comes with a separate ammo box and folding tripod. Users can switch between multiple shots to a single shot mode, for more precision.

What we like about it – The Havok Blaster is not only the largest but also the fastest in the Nerf arsenal, giving your kids a memorable Battle Royale. The fact that users can switch from multiple-shot mode to single-shot mode, makes the weapon more appealing.

Choosing a list of toy guns is not the easiest of tasks, considering the fact that a few parents consider them inappropriate for kids. However, kids, especially boys, love gun games and denying them the chance to explore their sense of adventure would be an injustice. The points denote how we came up with the list:

Age is the first factor that we looked into when making the list. Toy guns are not suitable for kids below 8 years. Kids who are 8 years and above will not only follow instructions but also take extra precautions when playing with toy guns. Younger kids require parental guidance when using these toys. All our toys in the list are recommended for kids who are 8 years and above.

As much as playing with toy guns can be fun, the safety of your kids comes first. Toy guns can be extremely dangerous, especially when aimed at the face or eyes. The target should be other harmless parts or an inanimate object, rather than the face. Kids can sometimes go overboard and deviate from instructions. When selecting our list, we had to ensure that all products have clear instructions on how to use the toy guns.

The input of clients is imperative when selecting a list of appropriate toys. Toy guns that had poor ratings were automatically crossed out from our list. Obviously, if a large number of consumers had a bad experience after purchasing a particular Nerf gun, then that toy does not deserve a place on our list.

Buying a toy gun can be tricky, as most parents and guardians tend to associate toy guns with violence. However, by following instructions, playing with toy guns can be safe, fun and satisfying even for older kids and adults. The following are some of the tips that you should consider when buying the most powerful Nerf gun:

Before making a purchase, find out about the laws and regulations that govern the use of toy guns in your area. Some countries/states do not permit the use of realistic toy guns. If the law permits, then you can go ahead and acquire one for your son.

Toy guns can be a great way of teaching kids how to be responsible when around weapons or firearms. Teach your kids not to use arms against anybody and caution them on the dangers of handling weapons

When buying a toy gun for your son, consider its value in relation to its return on investment. What are the benefits of purchasing a particular toy gun? What will your kid learn from using the toy gun? A good toy gun should offer great value for money, as well as an exceptional play experience.